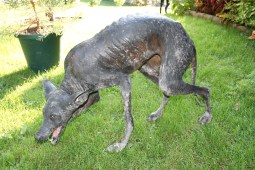 Our involvement with the so-called Chupacabra went back to 2006 at a corn roast in southern N.Y, It’s where I first heard about a weird creature that was captured and caged in the local area (Berkshire, N.Y.). This led to an interview with the two 15 yr. old kids who bagged the wild mammal. The museum struck a deal and purchased what was left, which were the remains of its juvenile bones.  This led to more investigation and other sightings and encounters throughout the US.  In 2009 we purchased another Chupa, this time the whole body, intact and taxidermied affectionately called the Blanco Texas Chupacabra.

The Chupacabra is a queer-looking hairless dog-like critter. Was reported roaming the backyards of America.  But as time went on and more data was collected, this was to become less a of a mystery and more of a sad unnamed medical condition these mammals had.

One of the main characteristics of a “Chupacabra” is its hairless condition, gray wrinkled skin. Scientists attribute the bald appearance to a condition known as mange.

Few scientists who weighed in on the issue, those who did believed the creatures look and skin condition was 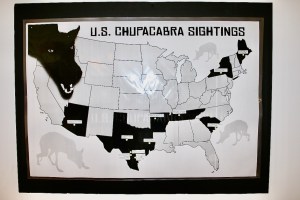 strictly due to mange.  Because eye-witnesses, cryptozoologists, conspiracist type people were forcing this weird beast into a “new mammal” species. The few scientists involved on a passive level concluded it was not a new species but guessing it is a coyote with mange. Because of their immediate take on the matter, it limited the academics possibilities of a satisfying conclusion to solve this mystery proper.

After 4 years of puzzlement, in the summer of 2010,  we received more pieces to the cryptozoological puzzle. The focus was on the particular style of hair-loss that the local folks anecdotal opinions now were making more sense that this is not mange. 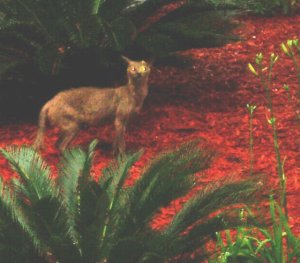 had explained away any mystery to this mammal by attributing this unique hair-loss as, “Oh, it’s mange.” These statements are in response from their personal observation of photos or a film we provided. That’s it.  There were no animals to examine. No real evidence. No laboratory testing, just images. Recently a few carcasses did make it into the labs and have been tested. 3 “Chupas” specimens. When testing results came back…are you ready?  Of the 3 Chupas “Mange” was the condition of two Chupas and “No Mange” on one.  Is this conclusive enough? How do we reconcile the testimonies of the locals and their “Street Smart” knowledge that it isn’t mange?

The problem was scientists had a mild interest and the least amount of evidence to work from. The;r opinion was without real hard evidence to examine. The locals swear it’s not mange and I sided with the locals and here’s why.

2010 was a banner Chupa year. Where other different species of animals with a similar skin and hairless condition appeared. Including a Chupa-Fox and Chupa-Coon (bald raccoon).  Then we discovered a Chupa-Bear at a German Zoo.  As the video here shows, a bald (Chupa) bear. All these none dog-like mammals exhibited the same condition as our gray hairless chicken eating canines did. As you watch the video you can see the grey color and folded skin on the back of the neck similar to our Blanco Texas Chupacabra.

The german zoo does not know what type of disease is causing this disorder. They are eager to find out. If it was mange there is a simple easy test to determine it.

So at this point, my thought was that the “Chupacabras” in the U.S. are a coyote or some type of canine mammal that has a, yet to be determined, known or unknown disease. But it is not mange. This sickness, whatever it is, colors the skin grey and the hair-loss is mostly complete with some hair remaining on the face and tail. It affects our dogs/foxes/coyote which we are now affectionately calling Chupacabra.

Leading  researchers at U.C. Davis conducted an extensive genetic testing of 3-4 “Chupa” specimens including the Blanco Texas Chupa and we will be sharing their conclusions as they ready to publish their results in some type of esoteric scientific technical journal in about a year.

But is was not till 2017 and then U.C. Davis shared with us their genetic test results. And concluded the Blanco Texas Chupa was a mix of Mexican wolf and coyote. Not a new species.

Museum’s Conclusion:     Based on U.C. Davis’s analysis, and the mentioned other animal 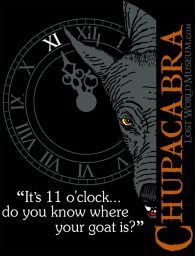 types of “Chupas”, the “Chupacabra” is not a mysterious yet to be discovered new species of mammal as some have suggested. It’s a diseased mammal.

Mange or not mange: Regarding its blue/gray bald skin… apparently it’s NOT mange… It’s mange-like. Locals who know mange and seen these critters in the wild, denied over and over that it was not mange and even the scientists are 50/50 on whether it’s really mange. So it’s Mange-like, but not the typical mange the local people see in diseased animals in the wilderness normally. They know and they know what they know.

To conclude, Chupacabra’s are not the devil, it’s a predatory mammal…with a mange-like disease.  We at the museum are satisfied,  based on the best evidence thus far, the eye-witness reports, YouTube videos and other animal species mentioned above affected by this same skin condition. Along with the  scientific analysis, this mystery is solved. There is no such thing as a Chupacabra. We are going to move on as sensational as this has been and will continue to be.

Thanks for subscribing! Please check your email for further instructions.

Something went wrong. Please check your entries and try again.
×
Scroll To Top